I worked with Stamen Design to help MPG Ranch make their data more accessible and educational by creating an interface system for research & learning. 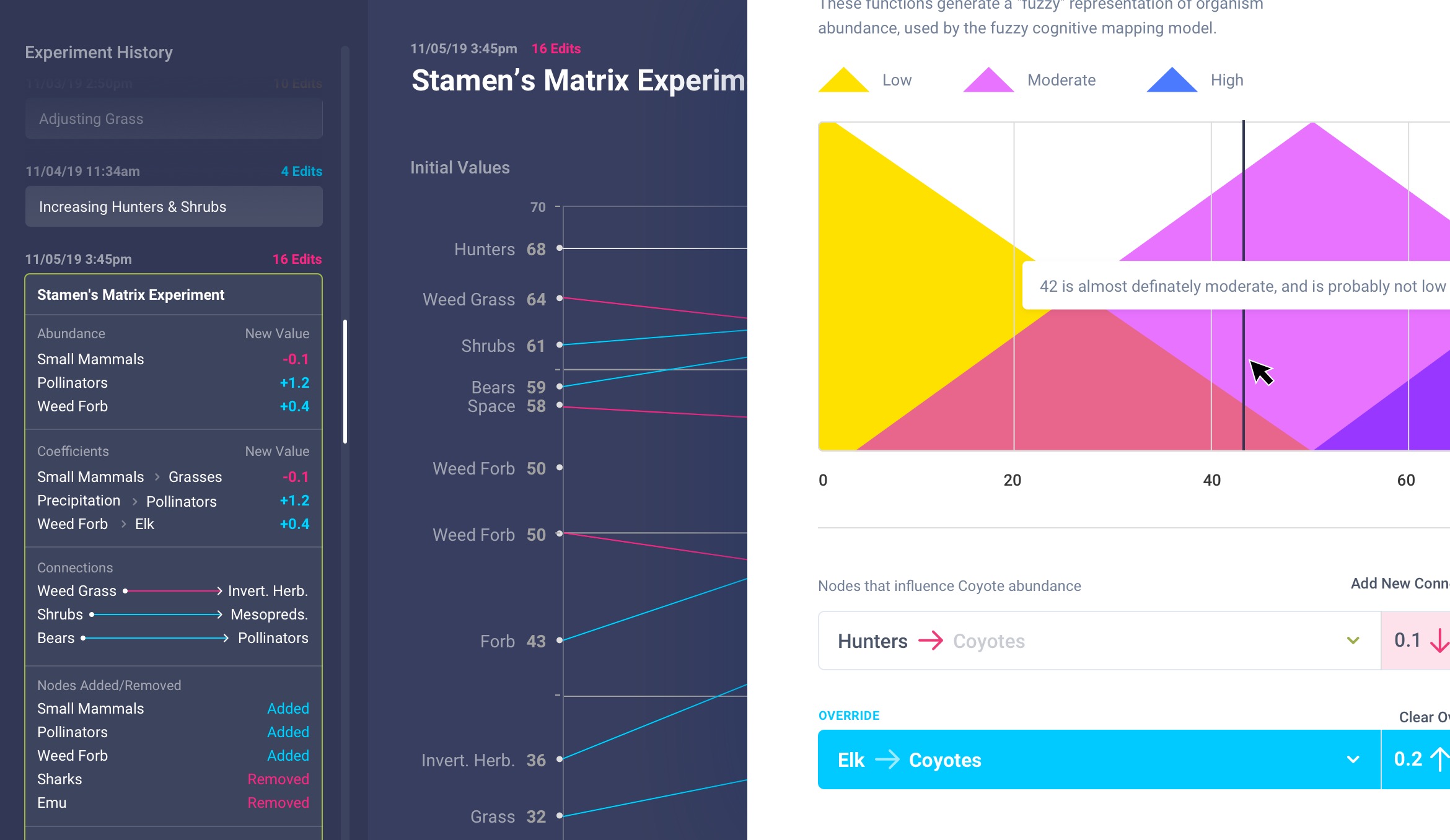 One of the most personally rewarding aspects of interface design is the experience of empowering someone to accomplish their goal - so I was especially grateful for the opportunity (courtesy of the data wizards at Stamen) to help researchers at MPG Ranch develop a tool for exploring how ecosystem management affects populations of plants and animals.

By the time I was introduced to MPG, Stamen had already produced a robust set of interactive prototypes and interfaces to learn from MPG data. My work consisted primarily of building a workflow and interface around one of these prototypes, a product called Matrix.

Matrix initially existed as a draft UI wrapped around a network modeling approach called Fuzzy Cognitive Mapping. Even though the model's purpose and mechanism were already defined, there wasn't a specific workflow for exploring the elements of ecosystems or storing and sharing the results. I used flow diagrams, wireframes, prototypes, and visual design to help get Matrix into the hands of researchers and educators.

I was responsible for executing all visual designs shown in this case study. As inputs, I received project briefs and was responsible for further synthesizing requirements from team discussion and brainstorming. I also originated the UI styling for the interface. For feedback, I presented to the team at various levels, including design, engineering, and directly to the client.

I explored existing UI patterns, looking for themes in how the prototypes represented MPG data.

I saw an opportunity to create a design system to connect past and future MPG interfaces. I collected and refined a library of interaction patterns to make solved problems immediately accessible for use in composing and testing new ideas. 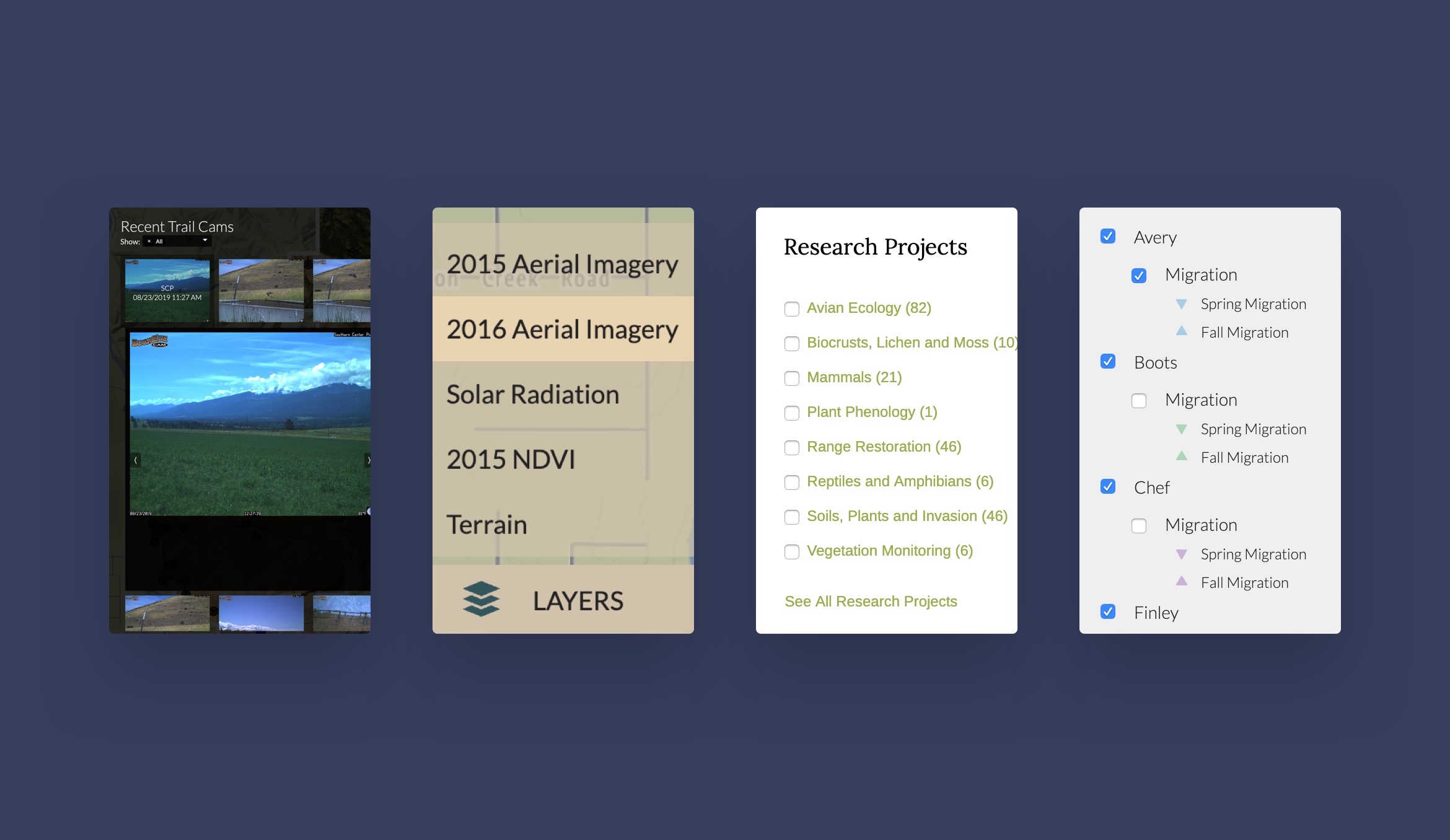 I consolidated these themes into a single library for easy implementation and development.

Stamen's prototype system was robust, but this didn't necessarily mean that the system of components needed to represent it was also complex. Once I understood the nature of the patterns and their variations, I found that most of the system could be represented with a straightforward set of components. 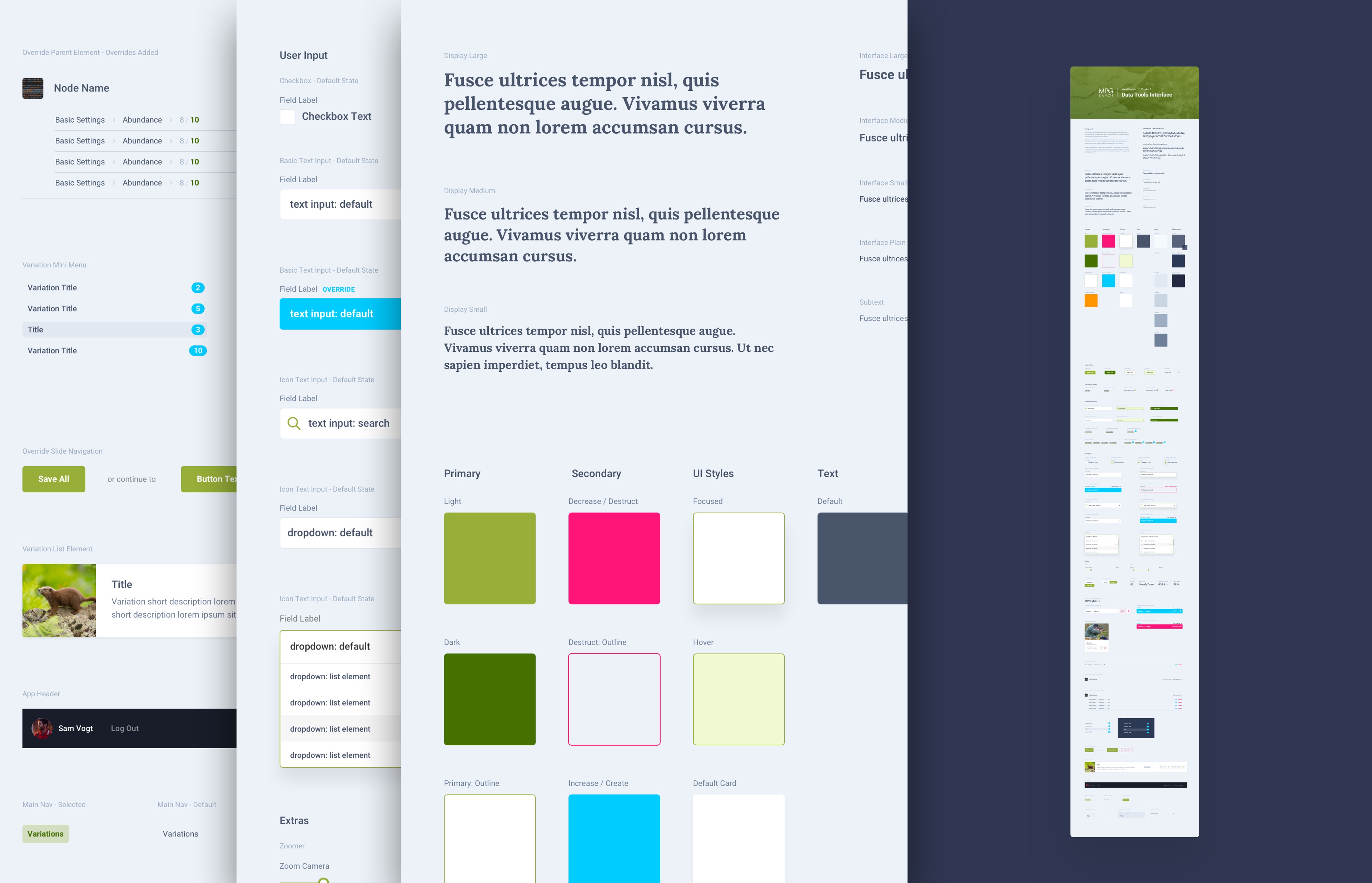 Once I had a baseline of interface components, I began to analyze the existing prototype for Matrix.

Stamen's Matrix prototype was a vital tool for defining the purpose and parameters that supported my interface design work. Using the knowledge and insight that Stamen had collected from MPG researchers, I defined a problem statement to guide work on the interface design for Matrix. 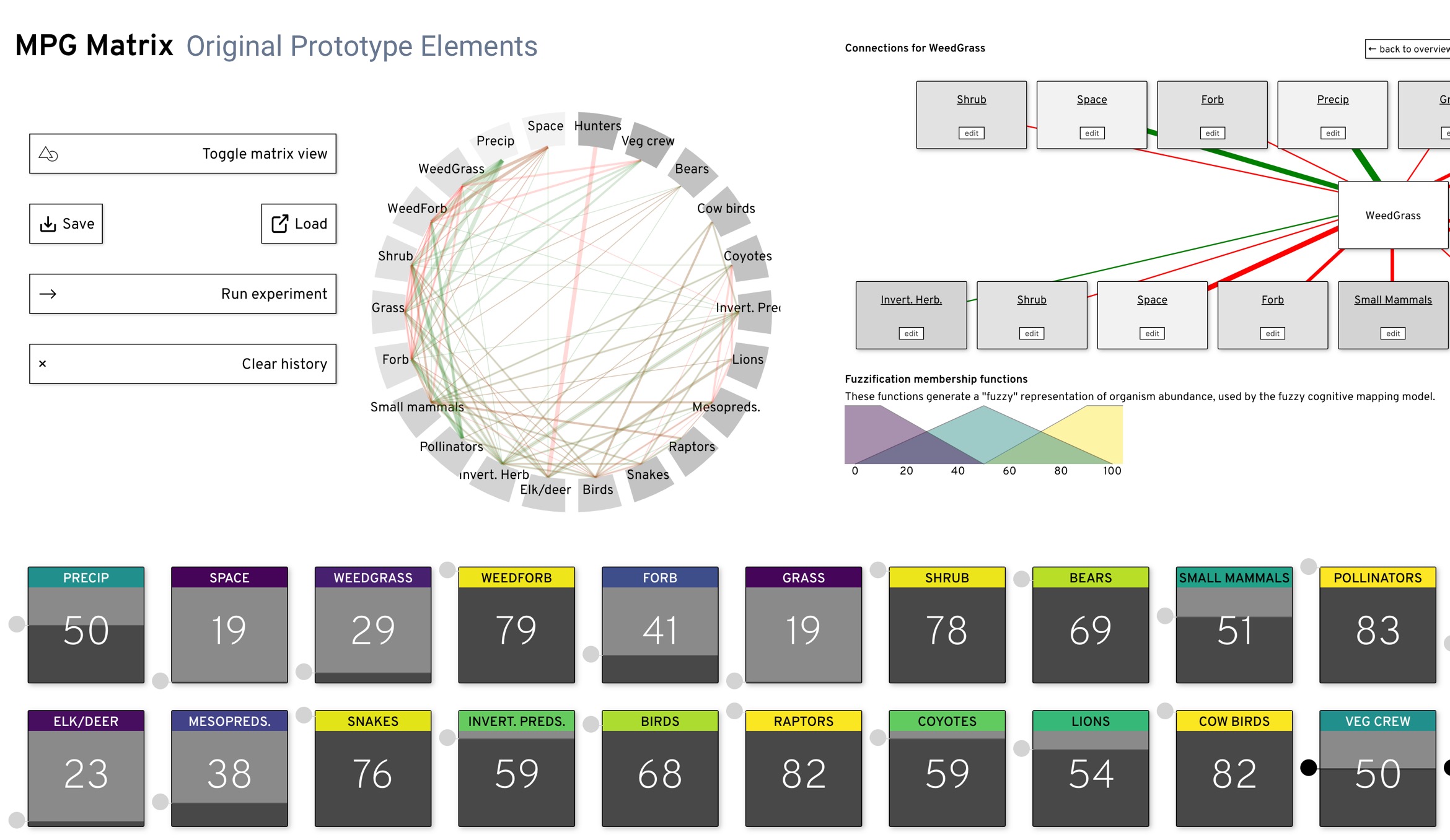 Researchers need a tool that makes the Fuzzy Cognitive Map accessible for use in exploring ecosystem changes, documenting that exploration, and presenting it to others.

I worked closely with Stamen to interview the group of MPG researchers would be the primary users for the Matrix tool.
Interaction Concept

Once I understood the purpose of Matrix, I explored new ways of interacting with the tool. 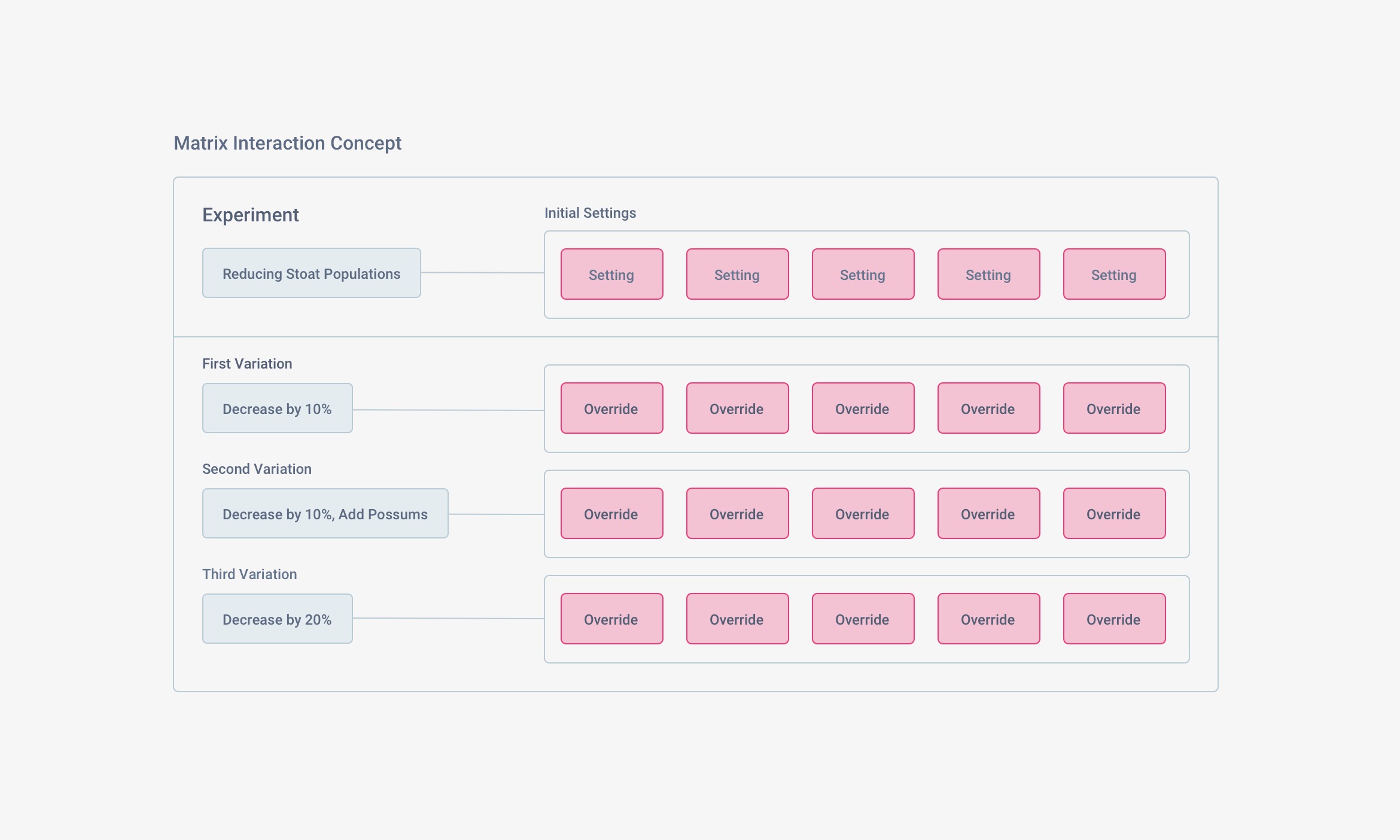 I chose to work directly with high-fidelity elements of the design system to compose and present interface concepts.

Especially when a prebuilt design system is available, I find that working with high-fidelity components helps ensure that interfaces look and feel real so that feedback can be as productive as possible. 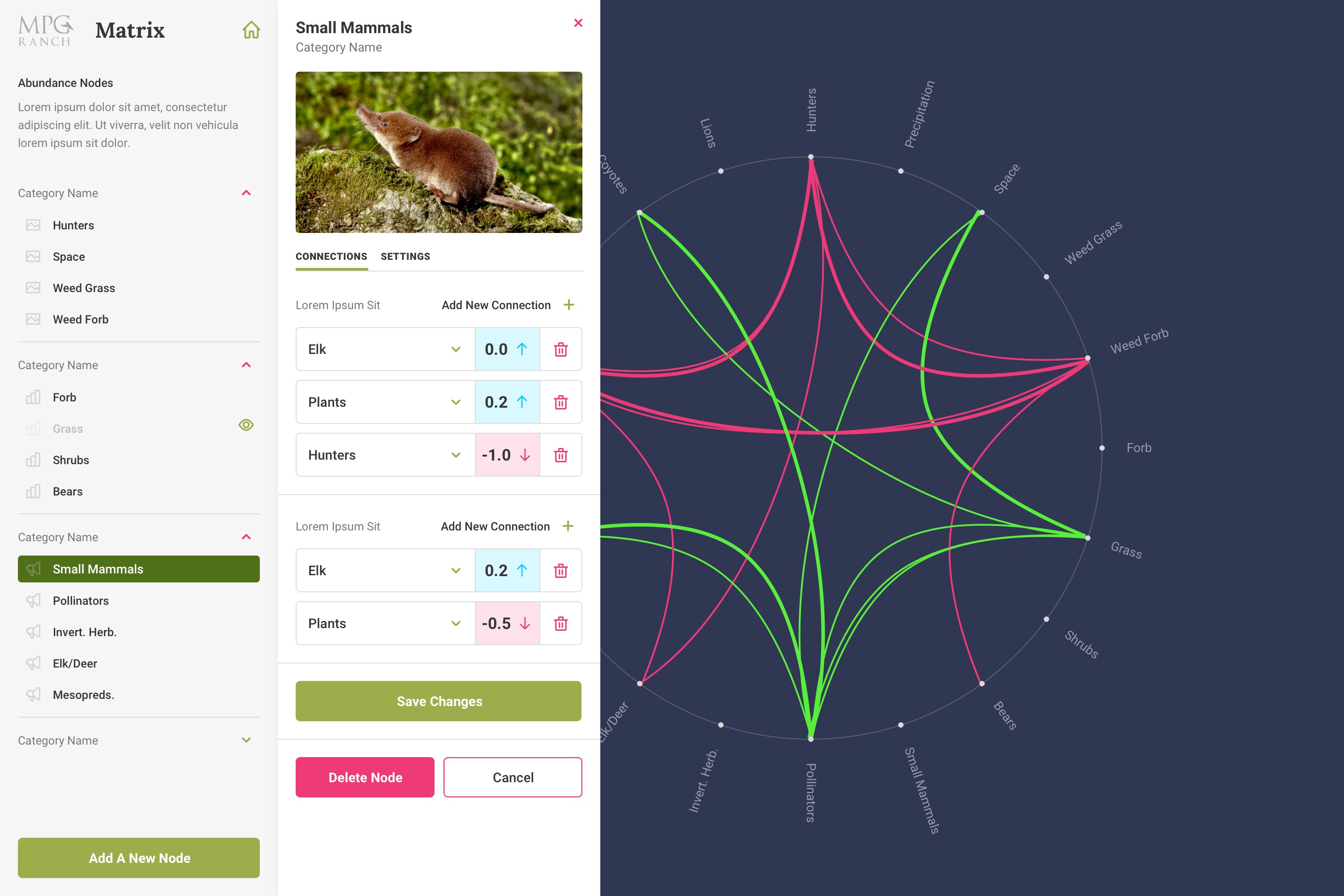 We learned that many students and educators are more familiar with diagrams that present species in a hierarchical, vertical layout.

I worked closely with Stamen to interview the group of MPG researchers would be the primary users for the Matrix tool.
Iteration

Based on user feedback I explored revisions to our radial diagram for representing ecosystem connections.

In addition to the feedback I received about user comprehension, I also recognized that a vertical layout would be easier to implement and iterate on than a more complex, radial rendering of the same information. 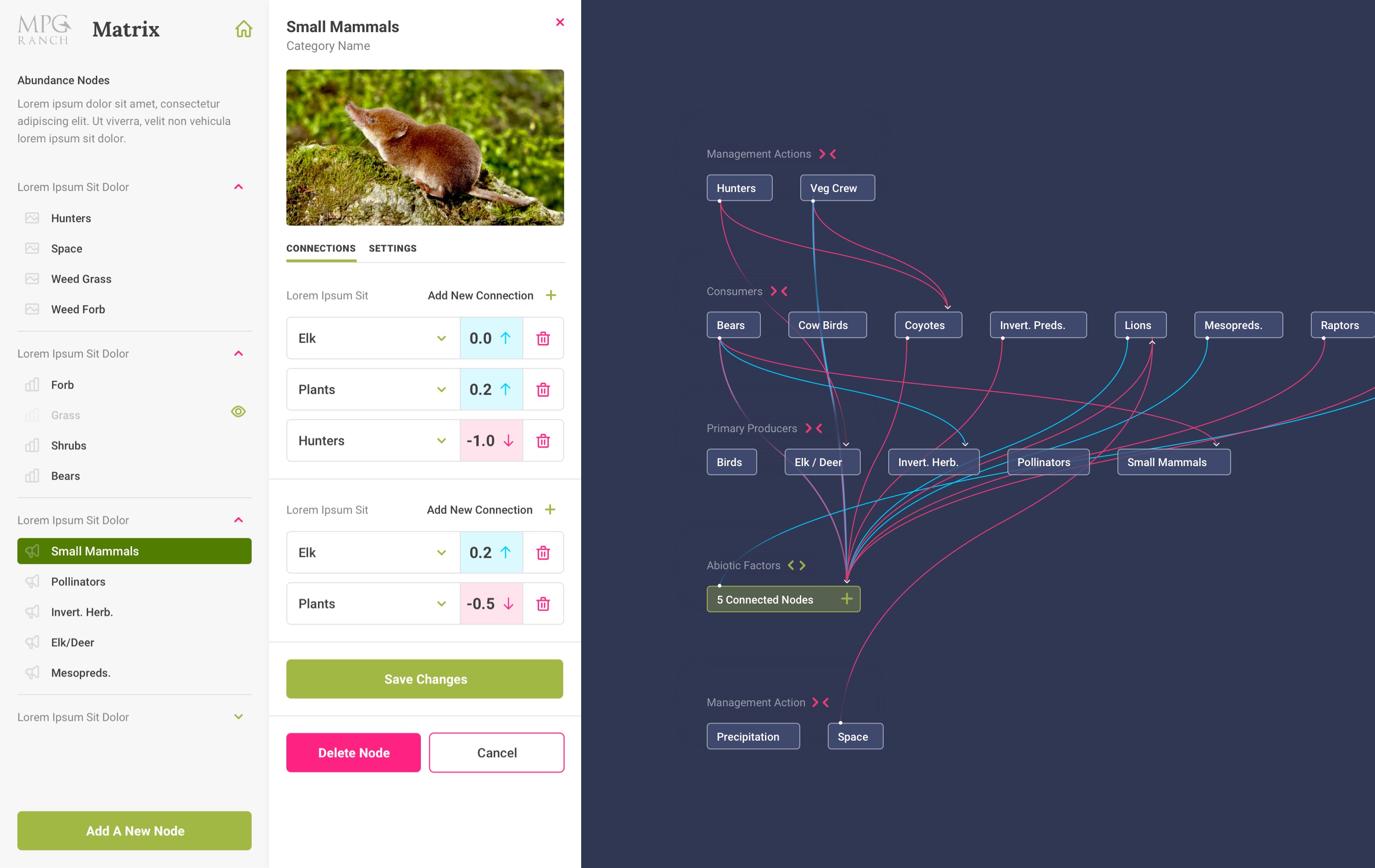 After working with MPG researchers to confirm that the new workflow could be useful, I constructed a user flow around each element of the concept.

A user flow was especially important to this process because the process involved putting labels on abstract ideas that hadn't been named before. Terms like "Experiment" and "Variation" helps our teams align and communicate about interface concepts. 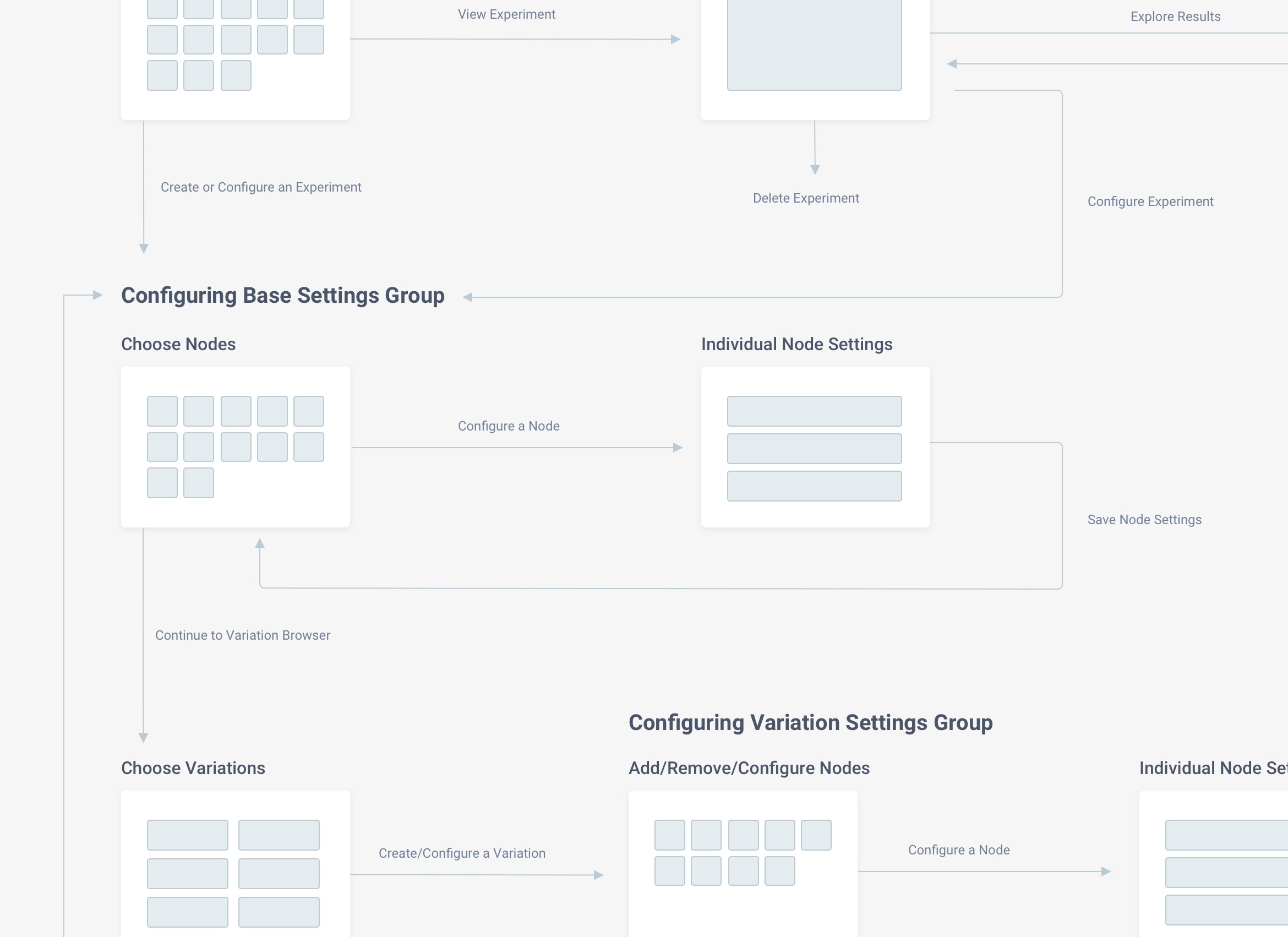 I created interface layouts that clearly reflected the new structure, using the flow and terms that we'd established.

In constructing the layout for this interface, I was conscious of the fact that our user group works with complexity every day. Even so, I didn't want to take for granted their patience or capacity to memorize detailed workflows. I focused specifically on making sure the new interaction concept revealed itself through visual hierarchy and layout. 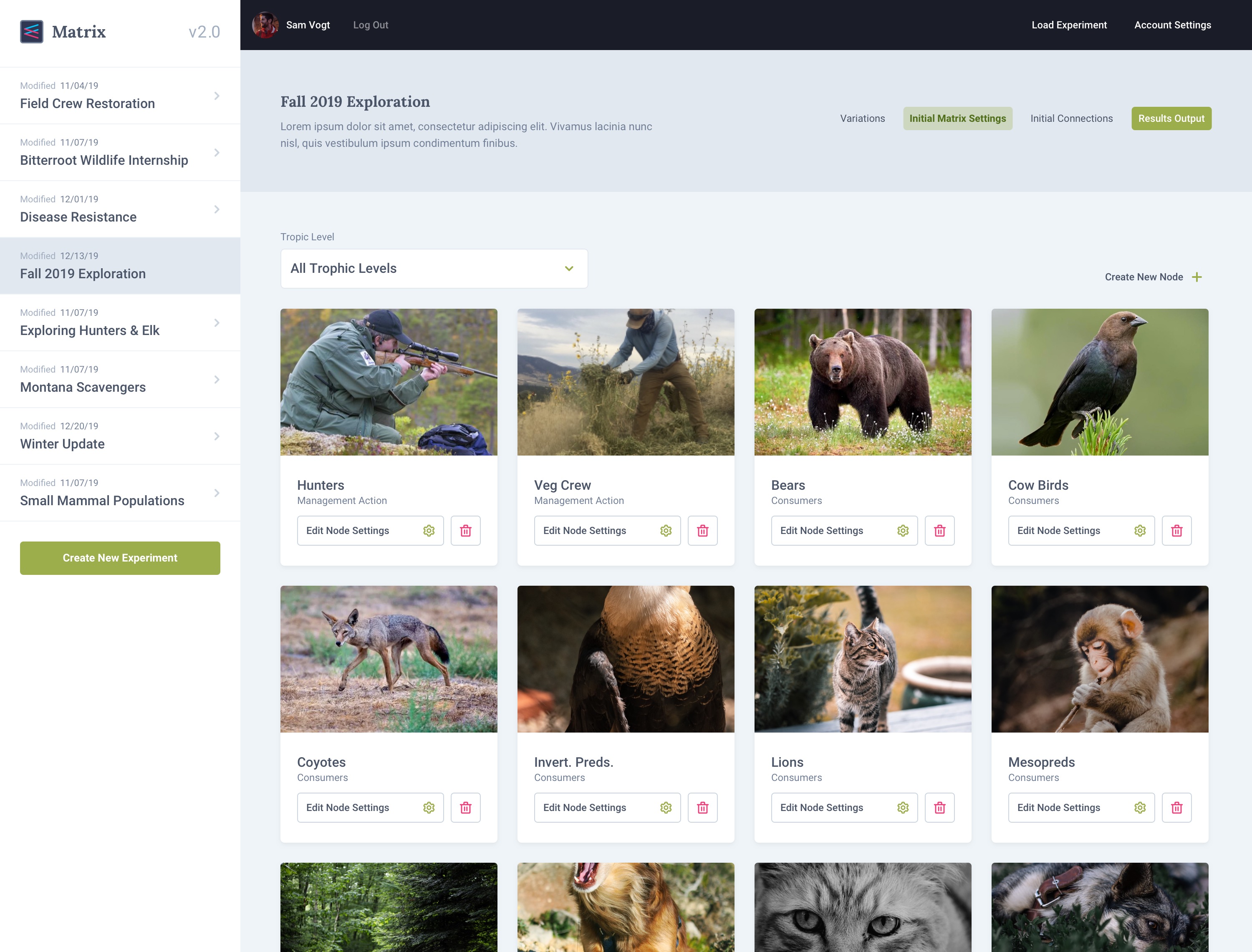 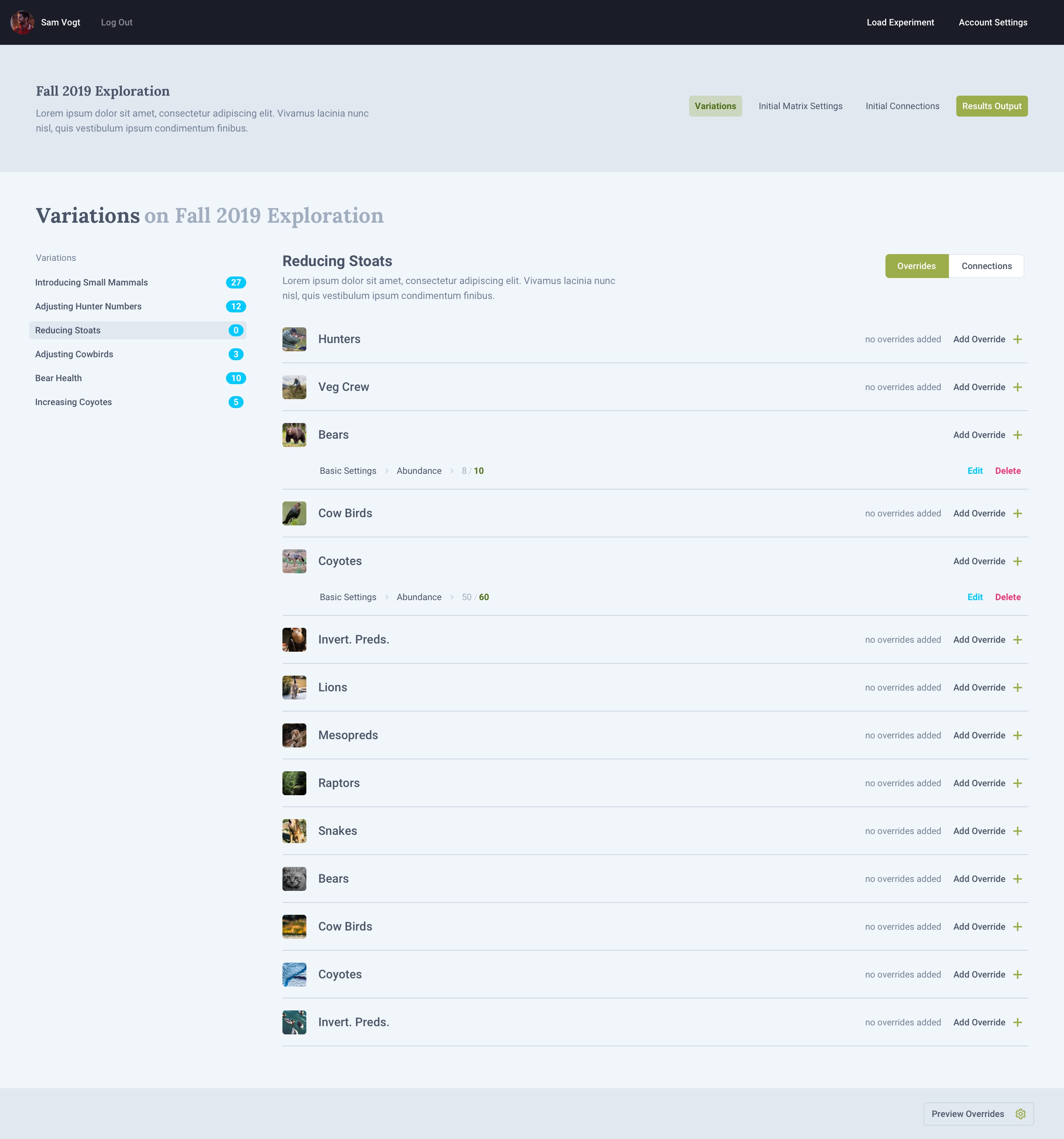 Formal qualitative testing was outside the scope of my work with Stamen & MPG. But I prepared a draft testing plan to kick off the process.

My work on the Matrix interface was based on interviews and conversations with MPG researchers as well as the Stamen team. Additionally, the work went through rounds of iteration based on feedback from presentations to the same group of researchers who will use the final tool. 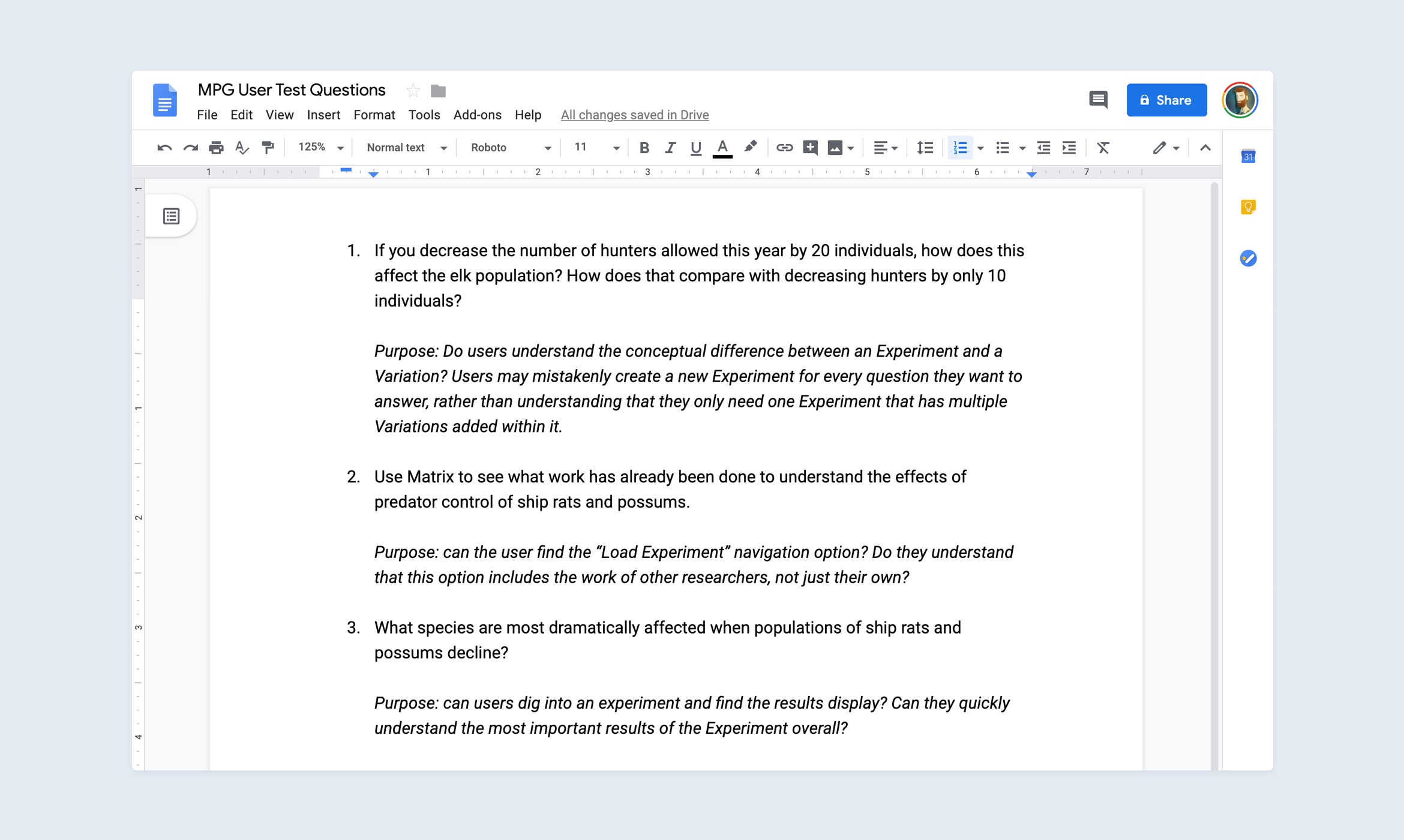 My contribution to Matrix established foundations for future work in the form of a component system and a high-fidelity interface design.

One of my top priorities for this work was to leave behind a functional system for quickly assembling interfaces within the product family of MPG data visualization tools. By working with a consolidated library of components, the Stamen team and I were able to iterate quickly in high fidelity to produce an interface that is ready for user testing. 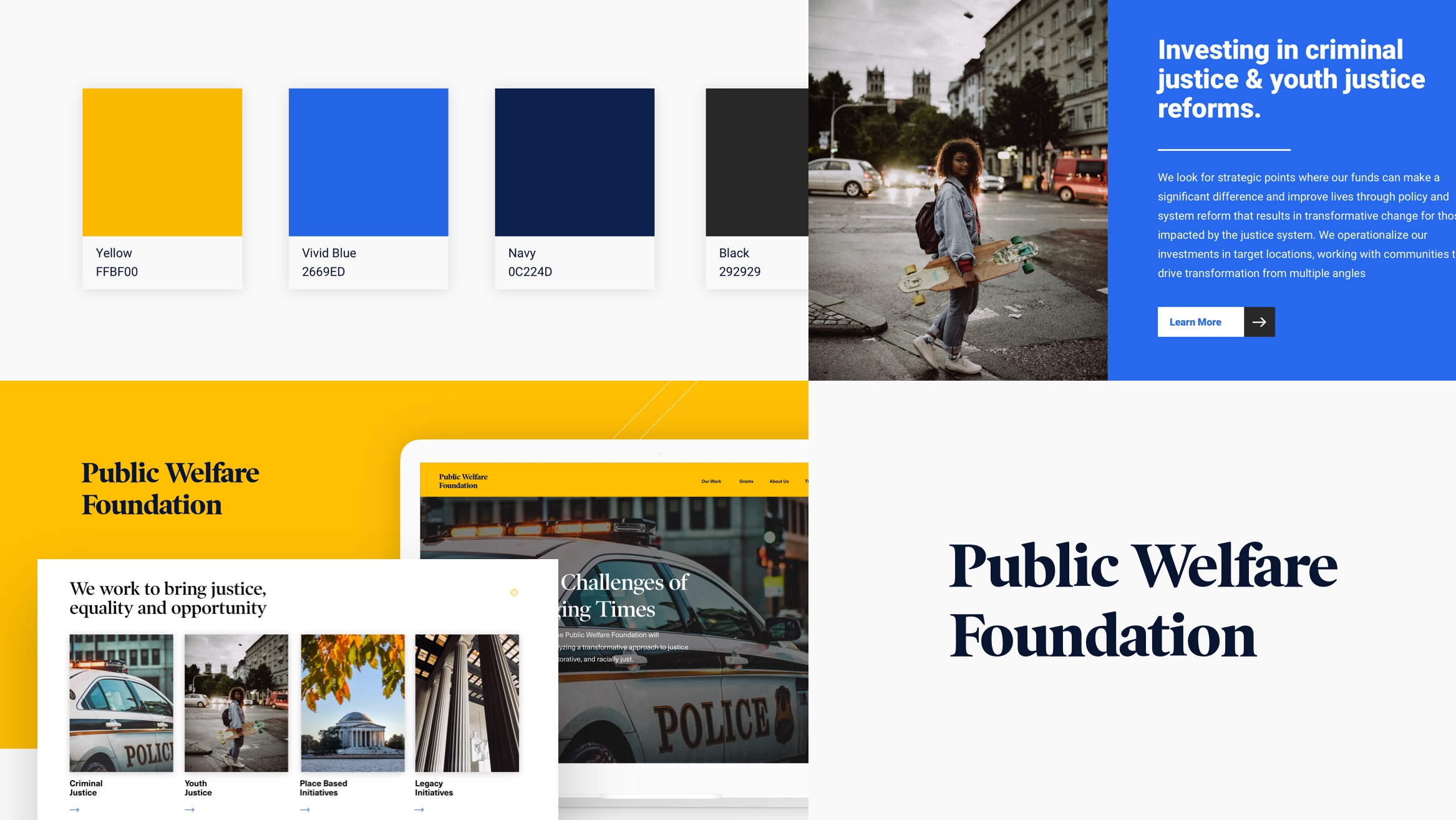 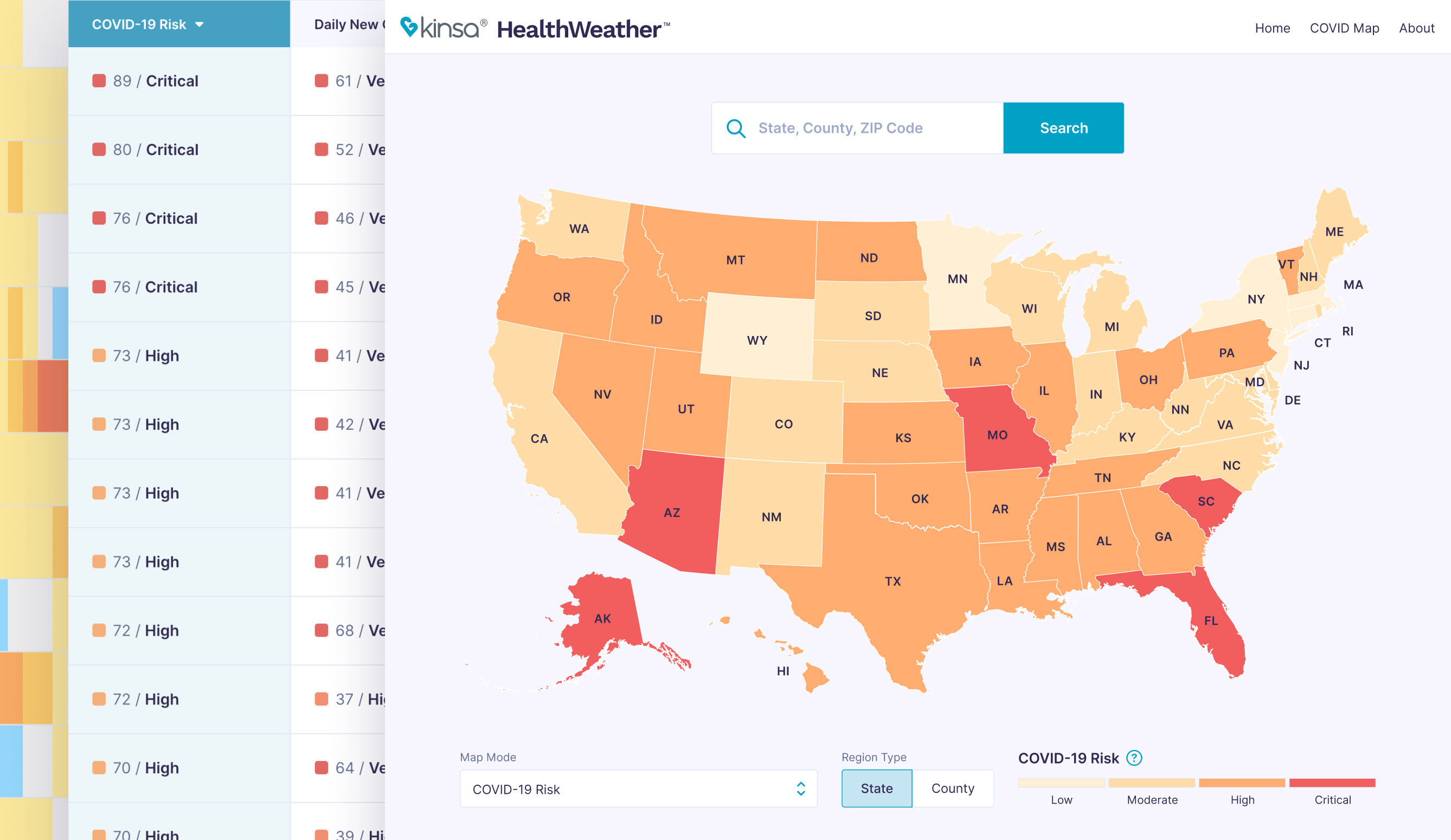 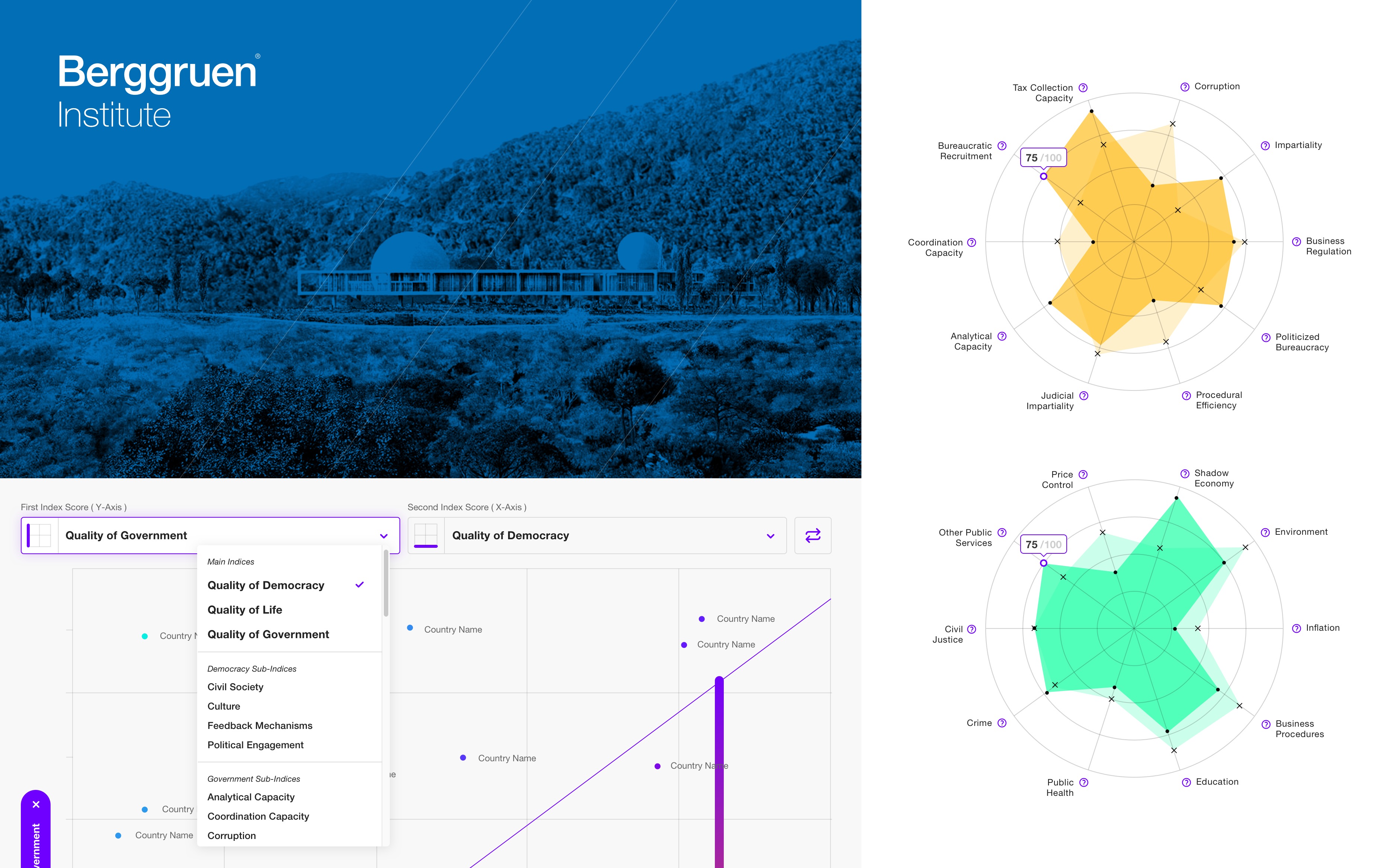 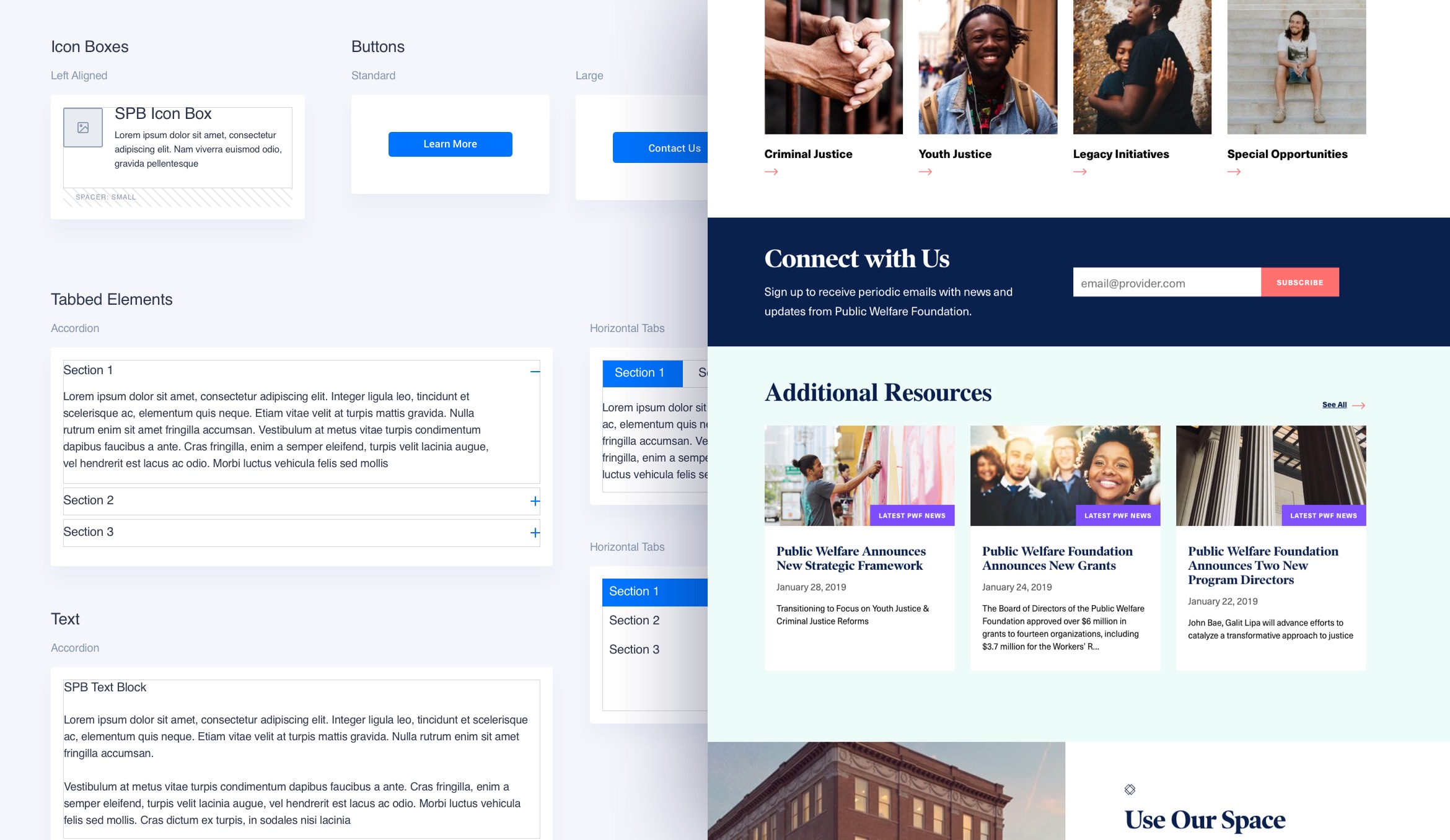